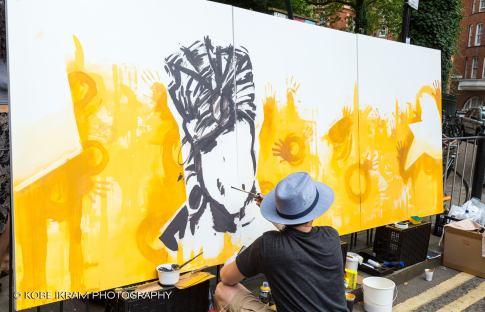 The right to enjoy and participate in cultural production is as important as the right to access health care, legal representation and education. For me, all four are cornerstones of a healthy society. I thrive on the cultural offer that is all around us, and strive to help others connect with and participate in it too.

An inclusive cultural strategy is one that reflects and celebrates all of who we are: playing in our orchestras, creating our public art, making the films we enjoy, performing on our public stages. It’s also vital that we hear from everyone in the shaping of what our cultural engagement looks like. The picture is currently very patchy: The Arts Council data report on equality and diversity in Arts Council funded organisations reveals how, despite increased funding being aimed at wider inclusion, those influencing our cultural output remain a fairly homogenous group: only 8% of Chief Executives, 10% of Artistic Directors and 10% of Chairs come from Black or Minority Ethnic backgrounds. Despite making up 46% of the workforce, just 35% of Chairs and Artistic Directors are female. Of the entire arts workforce (of Arts Council funded organisations), just 4% of staff identify as disabled, compared to 20% of the UK’s working age population.

This space is where I’ll share reflections on aspects of the UK’s cultural strategy, in particular around barriers to and solutions for increased cultural engagement.

Oxford’s Diversity Challenge: It’s not just about BAME access, May 2018

My alma mater, Wadham College, welcomed 4 black students between 2015 – 18. In the same period the university accepted only 6 black undergraduates onto the course which I read and enjoyed, English Literature and Language. At Wadham I was one of 3 black students – one a mature student from an American university. Strange times indeed for an East London girl. However, I’d come from an independent school, and was already used to not seeing many people around who looked like me. What I wasn’t ready for was the lack of what would at the time be described as ‘other’, that I’d taken for granted in my home town. At Wadham I made friends with just one person with visible disabilities, and didn’t meet any others; I met just one other person from a lower socioeconomic background. The lesbian and gay scene was open, friendly, and accessible: the BTQI+ scene was … invisible if it existed at all.

I’m not a fan of holding too much of history to retrospective censure. It’s when it creeps into the current that we have to pay close attention. Oxford, Cambridge and other universities deserve credit for the active steps they are taking to redress imbalances of access – and not just around ethnicity. Organisations like The Bridge Group are working closely with universities and producing compelling data and research around issues affecting social mobility. Class, gender, ethnicity, culture, perceived ability – all have significant impact on not just whether you get in, but also how you get on at university, and what you do beyond the years of study. But what would really make a difference would be a system which allowed for, and recognised, alternative ways of demonstrating scholarship, academic rigour, or aptitude for study.

I worked on the BBC’s marketing, recruitment and launch of what would become BBC Radio 1Xtra. My challenge was to find the talent, amongst a community of music fans who were not interested in BBC output. In response to a lack of mainstream content that served their tastes and interests, this talent had successfully created its own rules for success, validated by others who shared their values. Sourcing this talent for Radio 1Xtra involved looking at design portfolios, visiting nightclubs, and researching cultural influencers amongst the dance music scene. The point was: even if they didn’t have radio production experience, many creatives working outside the mainstream had the right ingredients to become national broadcasters and programme makers, and were demonstrating their aptitude daily in different ways. It was our job to find them, connect with them, and use much wider parameters to measure their talents.

I look forward to a future where Oxford, and other universities assess fitness for study, not just on exam results, but on additional means of evidencing ability. This can be achieved without compromising on excellence – the answer is not a lowering of expectations but a broadening of metrics. What potential students are doing online, in life, beyond the school gates can demonstrate potential for academic excellence as well as, if not more than, the vagaries of performance in an exam hall.

Dance: Why I didn’t want to be ‘mummy’: speech for PIPA’s first dance symposium, Barbican Centre, 2017

Parents and Carers in Performing Arts campaigns to improve access and opportunity for those with caring responsibilities to sustain careers – whether working on or off stage. PIPA started life in the theatre community, but in May 2018 at London’s Barbican Centre, PIPA convened its first conversation with the UK’s dance sector with a reception for 40 of the UK’s leaders in dance, with representation from Scottish Royal Ballet, Dance UK, Sadler’s Wells and more.

At 13 years old I thought I was on the verge of stardom. Having danced since the age of 5 (spurred on to start by my cousin Debby’s appearance as a child actor in Alan Parker’s ‘Bugsy Malone’), by 13 I dedicated every spare moment to dancing, to the amusement of my 4 football loving brothers. In those pre-internet, pre-video days, I had to be pretty determined – and thick skinned – to withstand the mockery as I religiously watched Moira Shearer in The Red Shoes, and every Gene Kelly film ever, at Christmas in my house.

At 13 I was taking part in a summer dance course at The Place Theatre. It was absolute bliss. Every day I’d gaze dumbstruck as the stars of London Contemporary Dance Theatre walked past us to go to their rehearsals: Richard Alston, Namron, Robert North were my poster boys. So when I was selected to be a soloist in the summer course end of show performance, I thought, naturally, my talent had been recognised, and like something from a Chalet School novel, my path to prima donna status was assured.

The dance, choreographed by the legendary Royston Muldoon, was a piece created to reflect a very multicultural story, so pertinent at the time: a people’s migration through history and land: from slavery to escape, freedom and integration.

My solo was to come at the end. The glorious, Afro-cuban inspired percussion stilled. The lights dimmed. And then a spotlight. Oh, it couldn’t get better, could it?

Except..my solo was to walk out on to the stage, alone, into the spotlight, as if laden with bags. I would put down the bags, stretch my aching back, and from the wings, 4 of the smallest dancers would rush out , clamber over me and I’d lead them off stage. At 13, being taller (and clearly looking more world-weary) than the others, I was cast as ‘Mum’.

I knew at 13 I didn’t want to be ‘mum’. Being a mother meant the opposite of my childhood dreams. Motherhood meant that I was no longer part of the exciting, creative, glamorous future. It meant being laden with bags and surrounded by smaller people whose needs I was meant to serve.

I continued dancing for some time after, but the metaphor (was it even a metaphor? It was actual!) wasn’t lost on me. Forget about the pram in the hallway, motherhood meant the end of beauty, of magic, of lights and applause.

When I was invited to Chair PIPA, I had hardly given this episode any thought in the intervening years. But when invited to speak to an audience of dancers, practitioners, commissioners and influencers, I reconnected with the disappointment felt by my 13 year old self, and it resonated with the challenges faced by those working in dance. If I am a mum, can I also be a dancer?

Reflecting on my harsh realization that I’d never be Darcy Bussell, I also thought about the assumptions I made about performance. Right up until my involvement with PIPA, I’d never given a thought to the lives behind the magic: the individuals who created those moments that stay with us forever, and shape who we are.

I’d never thought about how parents make touring work, how carers manage the irregular hours, last minute schedules, ad hoc auditions and the sheer physical exhaustion that can come from creating great performance – for those both on and off stage.

And I’ll bet very few of those in any audience are wondering how stage workers on and off stage manage the challenges of both caring and making performance happen.

For dancers, the issues of parenting are particularly complex. There’s body image, physical strength, fatigue (and the physical dangers of working whilst fatigued) to reckon with, in addition to the issues faced by all workers in the performing arts: work/life balance, unsociable hours, unscheduled changes, last minute calls…

At the Barbican event, performers and management shared concerns and examples of the lengths dancers go to in order to hide pregnancy, for fear of missing roles, the sacrifice of family time to secure roles, the downplaying of family commitments, and need to be at rehearsals hours before classes start, for fear of looking less committed than non-carers. Most of these issues are by no means gender –specific, though clearly some issues affect female dancers disproportionately.

So many stellar roles require female leads to play innocent, ingénues: how does this work at casting stage for those newly returned from maternity leave?

There is sterling work being done by UK Dance and others on dancers’ physical and mental wellbeing, and PIPA’s new dance partners are keen to explore what a more inclusive future might look like: for both the talent on-stage, and the magic-makers offstage.